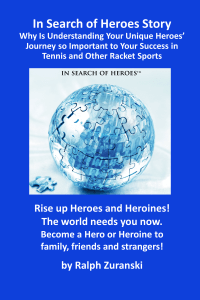 After playing, researching, and teaching tennis for years, I realized the battle to win in sports, business and relationships takes place in your own mind. The book, “The Inner Game of Tennis” by W. Timothy Gallwey, helped me explain my unique perspective on the psychology of tennis and life to my students. I counseled them, “If you can make peace between your two warring brain hemisphere personalities, the ‘Self One’ and ‘Self Two,’ integrating your brain and body will make you almost unbeatable.”

I created a short story to stimulate their imaginations.

“Indulge in this delicious fantasy! Imagine you are the ultimate genius and athlete. You are a tennis super star, earning gazillions of dollars annually. International fame is yours.

“You travel the world, meeting with dignitaries, heads of state, movie stars, and great men and women. The most difficult problems facing humanity are easily solved by your incredible mental powers. You inspire hope and proclaim the possibility for peace, happiness, and prosperity for future generations. You are a ‘Biomaster,’ leader and teacher of the ‘Balanced Way.’

“You are admired and respected internationally for shattering the previously accepted mental and physical barriers of human performance. How does it feel to possess superior coordination, unlimited endurance, incredible strength, and an integrated body and brain?

“What is it like to be ambidextrous mentally and physically, using both the right and left sides of your body and brain hemispheres? How would you describe the reality of using 90% of your brain rather than the norm of 10%?

“People are always asking, “How did you do it? Is it possible to do what you have done?” You are humble, loving, open-minded, altruistic, and desirous of helping others. You know anyone who learns the secrets of a balanced brain and body can attain even greater levels of physical performance and mental awareness. You are willing to share the secrets of your astounding success, how you became a ‘Biomaster.'”

The above story is a fantasy, but potentially real. Back in 1980, when I first created the “Tennis Challenge of Balance” program, Lionel Burt, the inventor of the Dual-Grip tennis racket gave me one to test. I learned of the incredible human physical and mental powers possible when both sides of the body and brain are developed equally. The dual-grip on the tennis racket made it easy to play two-handed off both sides and use forehands for shots out wide.

Every heterolateral stroke (cross-crawl motion) integrated and strengthened both sides of my body and brain. I never used a homolateral one-handed backhand (same arm, leg, and brain hemisphere motion like a lizard) and thus was spared the psychological war waged inside most people’s minds. (Behavioral Kinesiology by John Diamond, pages 41-42)

Timothy Galloway described it pretty well in his book, The Inner Game of Tennis. “The Self-One and the Self-Two worked together as a team rather than as enemies. I did not scream, yell, or throw temper tantrums on the court. Opponents fell like dominoes from the very beginning. I learned not to defeat myself and let others be their own worst critics!”

I practiced with the Dual-Grip tennis racket every day. I did my mental aerobic drills often because it was so much fun. The results were so incredible. The rest is history!

The Dual-Grip tennis racket is a revolution in technology and will have a great impact on most racket sports. A significant percentage of the top money winners in tennis use two-hands. As Pancho Segura says, “with so much money coming into the game now, eventually some super athlete will come along who is versatile enough to play with either hand or both hands, both sides…if only I could have had my two-handed forehand both sides.” (London Financial Times, In My View by John Barrett, March 31, 1993). If you incorporate the learning techniques that are a result of brain research with balanced exercise anything is possible.